As a trusted voice of business not known for indulging in hyperbole, the Financial Times is rarely moved to describe the work of any enterprise as “reshaping global electronics”. But then, when the phenomena in question is genuinely unique – and a catalyst for delivering everything from radically better healthcare to net zero energy – the accolade is probably more than deserved. Who and where is this centre of game-changing excellence? Step forward the Catapult, sat at the heart of a world-leading Compound Semiconductor Cluster on the Imperial Park, Newport, South Wales.

Nowhere else in the world has this in place

The Catapult is at the centre of the only Compound Semiconductor cluster of its type. No other place in the world has the epilayer, the universities, the foundry, the packaging house and the equipment providers working in a formal partnership, within 20 miles of each other – all underpinned by a Strength In Places Fund and UK government-backed pathways programme. It brings enormous advantages over the other clusters dotted around the world. And it offers a moment in time for Wales: the chance to capitalise on a concentration of companies that can be the catalyst for the next-generation of breakthroughs across every product sector in the world – as well as a magnet bringing to Wales the multitude of organisations who want to embed compound semiconductors in their applications. 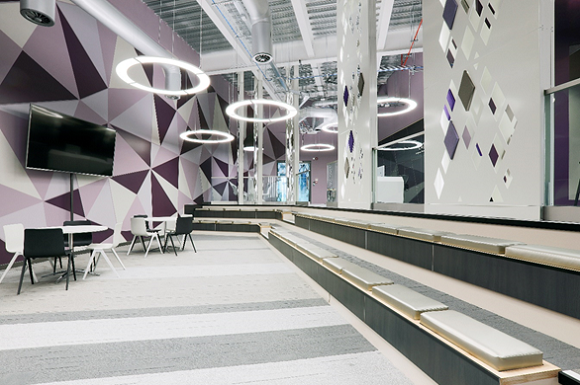 There are endless possibilities to the potential applications of what we do here.

Wales has history with this once-in-a-generation opportunity, of course. The FT made comparisons between the potential of the cluster and the century of coal where Wales fulfilled one third of the world’s demand for energy – effectively becoming a powerhouse for the whole world. That comparison is very real, as Wales in many ways also gave birth to the modern UK Semiconductor industry, with the Inmos plant opening up in Imperial Park on the western fringe of Newport in 1982, starting a Welsh success story that’s seen the growth of world-class operations such as IQE, Newport Wafer Fab and SPTS (all partners in the cluster, alongside the best-in-class research teams at Cardiff University and Swansea University).

What’s the single biggest lesson to be learned from the near and distant past? Seize The Day. Or in the words of Martin;

“It’s time to be bold, to be positive, to be confident. There are endless possibilities to the potential applications of what we do here. We’re producing simulations and models that accelerate product time to market in everything from net zero energy, 5G and the next generation of electric cars, to revolutionary healthcare technologies and ground-breaking medical devices. Right here, right now, from Wales to the world.”

We’ve put Wales on the map, with a platform to drive markets worldwide

The extent of that potential is clear to see, with the Welsh Compound Semiconductor cluster clearly earmarked by the UK government as a lead ‘Industrialisation Centre’.

“As a key player in the UK government’s £80 million ‘Driving the Electric Revolution’ programme, we’re already creating an end-to-end supply chain for components and electric motors across South Wales and the South West” explains Martin, “so we’ve already put Wales on the map as the main Industrialisation Centre in the UK. And bringing together all those industrial, university and research facilities has now given us the platform to drive markets world-wide.”

The work of the cluster is sure to revolutionise how people live across the world – as well as creating immediate results closer to home. The Catapult has a remit to help ‘local’ SME’’s develop ground-breaking applications and is currently working with a number of start-ups – including a Space Exploration company, helping them develop a pioneering technology in the collaborative environment to be found at Imperial Park.

Creating the jobs and knowledge-base that will power our future

The impact on the Welsh economy – in terms of high value job creation, growth of local SMEs, strengthening of Welsh university reputation and employability for students currently of school age – is difficult to overstate. Over 3,000 well paid jobs are being generated, with The Catapult also sponsoring STEM degrees and PHDs in partnership with the UK Electronic Skills Foundation. Beyond that, the cluster is investing directly in the future generation, working with schools to create The Catapult STEM Academy, which has already delivered a Compound Semiconductor kit that enables highly engaging pupil participation in the practical uses and incredible potential of Compound Semiconductors – with lessons (such as how to revolutionise healthcare) focused on bringing more female students into a traditionally male-dominated discipline.

A unique cluster that’s reshaping the world, harnessing the skills and knowledge of people in Wales – and building on the valuable lessons learnt from the past …