Settling the Debate – Which Generation Had it the Toughest?

It’s the nation’s favourite debate: the Baby Boomers had it easy, Millennials are doomed, and Generation X sort of just sailed through. But how do they actually compare?

By collating historical data from the UK government as well as a survey, Freedom Finance launch a This is Great Britain campaign which compares each generations opportunities regarding house buying, working life, savings and retirement to find out which generation really has it the toughest?

According to many baby boomers (those born in the early 1940’s to the mid 1960’s) millennials have it the easiest! They said “There’s more money around, parents are better off financially, and they have access to technology which makes their jobs and lives easier.”

However, Millennials disagree believing that baby Boomers had it the easiest “jobs were easy to get and there was a more liberal lifestyle where society was more relaxed”.

But it seems that there is one thing a lot of people do agree on, money is more an issue now than ever before.

So based on data, who are the generational winners and losers?

Each generations opportunities broken down:

All three generations agreed that the main reason for saving money through their lifetime was to buy a house. Getting on the property ladder is a goal for many but how easy has it been across the years?

Those surveyed admitted that saving for a deposit was their first struggle. According to UK Gov data the average house price today is 98 times more than it was in 1956 (£223,807 today vs. £2,280 in 1956 according to gov.uk)[2], yet wages have not increased at the same rate. Because of this, it’s taking longer for people to save and therefore longer to move out.

Because of this, the average age for buying a house is rising with the average age now being 31 years old. That’s 4 years difference in comparison to baby boomers where the average Brit bought their first home at 27 years old for an average of £2,280.

When it comes to working life it’s proved difficult to compare the generations due to such drastic changes in the employment landscape. Millennials/gen Y feel less secure in their jobs than the older generations and are more stressed, yet the leaps forward in technology could arguably make their working lives easier.

However, despite increase in fees, UCAS data shows that there are more young people attending University than ever before. Millennials believe that jobs were easier to get in the baby boomer generation which could be why we are seeing an increase in people going into further education now to build up their skill set making them more employable.

The survey revealed that 91% of baby boomers started full time work at a young age between 18-24. Whereas just 59% of millennials are now. 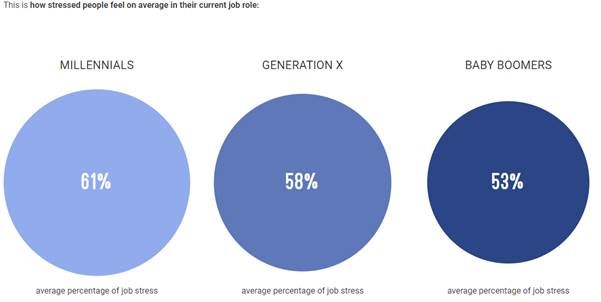 And despite the advances in technology, millennials feel more stressed in their work life/career than any other generation.

After starting a career and buying a house, what opportunities did each generation have regarding savings?

The survey by Freedom Finance found that almost a third of millennials have less than £500 in the bank. That’s not even enough to cover the average one month’s rent in England at £679 [5]. It’s not necessarily for a lack of trying though as the survey also revealed that millennials/gen Y are more likely to start saving at a younger age than both generation X and baby boomers.

Despite saving later on in life, Baby Boomers had more money in the bank according to the data. Just 12% of baby boomers had less than £500 in their bank where as 29% of millennials have less than £500.

After a life of working, saving, and of course living – retirement is something that is too important for all generations. The average age to retire is now 66 but baby boomers believe they could be working up until they are 70. 13% of baby boomers believe they will be working still over the age of 70 and because of this, they started saving for retirement at 29 years old.

Currently, the full basic state pension is £122.30 a week (According to Gov.uk[3]) however, the survey findings showed that 50% don’t think state pensions will exist when they are older. 77% of millennials/gen Y think that retirement age will be unreasonably high by the time they get reach it.

To explore the This is Great Britain campaign further, you can find more info on the research here https://www.freedomfinance.co.uk/this-is-great-britain/