A team of highly-skilled, young Welsh butchers have headed out to California to compete in the World Butchers Challenge this weekend – and they’re being backed all the way by Blackwood-based Atlantic Service Company.

Craft Butchery Team Wales was set up by the Culinary Association of Wales to take on the rest of the world’s best teams in a competition that has been dubbed ‘The Olympics of Meat’ and Atlantic Service have provided much of the equipment the talented team will be using during the competition in Sacramento. 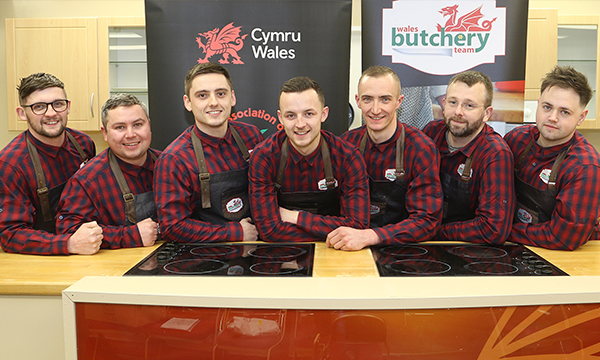 The team consists of seven specialist craft butchers, including Craig Holly from Chris Hayman Butchers in Maesycymmer, captain Peter Rushforth and five others who can all demonstrate ability and honours including Welsh Butcher of the Year or Junior Butcher of the Year.

At the event, the team will take a pre-defined range of meat joints and be tasked with producing a colourful and attractive themed presentation display in an attempt to wow the judges.

Working alongside other major sponsors such as Wales-based Hybu Cig Cymru, Food & Drink Wales and Cambrian Training, Atlantic Service has given the team full access to their extensive stores to pick and choose the tools, knives and equipment they want to maximise their chances in the competition.

“We are delighted to sponsor Team Wales for their debut event and we look forward to seeing how they get on. Given our Welsh base, it was a natural fit to offer to supply the knives and blades they’ll need to compete. Our products are used around the world, so for us to see some of Wales’ best butchers use them in a global competition is a great honour.

“We supply 3,000 butchers shops around the UK and most of the team work in shops that already use our products – including our fellow sponsors M.E.Evans and Jones Brothers of Wrexham – so when the team visited they quickly understood exactly what they wanted – it was like seeing a group of kids in a sweetshop when we let them into our Stores area to pick what they wanted!”

Craft Butchery Team Wales co-ordinator Chris Jones, who will be Wales’ judge at the competition, added:

“It’s an entirely new experience for the butchers because this will be their first team competition and they don’t come any bigger than the World Butchers’ Challenge. They are all understandably proud to be representing Wales, because not many people get that chance, and we shall be doing our utmost to fly the Welsh flag with style.

“We’re delighted to have Atlantic Service backing the team and they have been a great support from day one. Their handsaws and knives are renowned as being some of the best quality in the world, so to be able to specify what we wanted was a great boost for the team and will definitely give us an advantage”

The World Butchers’ Challenge takes place on 2nd-3rd September 2022 in Sacramento, California and Team Wales will be competing against 13 high-class opponents from as far afield as Canada, Brazil and New Zealand.